Review: The Mortal Instruments: City of Bones by Cassandra Clare 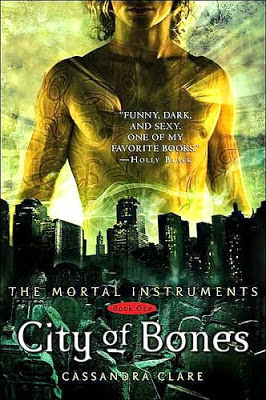 Summary (from Goodreads):When fifteen-year-old Clary Fray heads out to the Pandemonium Club in New York City, she hardly expects to witness a murder - much less a murder committed by three teenagers covered with strange tattoos and brandishing bizarre weapons. Then the body disappears into thin air. It's hard to call the police when the murderers are invisible to everyone else and when there is nothing - not even a smear of blood - to show that a boy has died. Or was he a boy?

This is Clary's first meeting with the Shadowhunters, warriors dedicated to ridding the earth of demons. It's also her first encounter with Jace, a Shadowhunter who looks a little like an angel and acts a lot like a jerk. Within twenty-four hours Clary is pulled into Jace's world with a vengeance, when her mother disappears and Clary herself is attacked by a demon. But why would demons be interested in ordinary mundanes like Clary and her mother? And how did Clary suddenly get the Sight? The Shadowhunters would like to know. . .

I was thinking about doing a book and movie review here, but I just really wanted to read and review this book before the movie was released, which I am so damn excited for! Maybe I'll update this post at a later date and add a movie review. This is such a good book, and I know I'm late jumping on the wagon with this fandom, so there's not really much I can say about this book that hasn't already been said, but here we go anyway.
This amazing book with it's incredible plot and story-line immediately demands your attention and requires a reader that pays close attention to detail - it's just that good. City of Bones will have even the most devoted of non-readers in it's grasp, with it's originally quirky, funny and intense story-line that is suited for people of all ages.
There are few writers who are able to write fantasy novels and continue them as series with perfect precision; Emily Rodda and J.K. Rowling are two of them, and Cassandra Clare is another.
Sit back with a cup of tea or coffee and watch the perfectly woven web Clare has created unravel and transform beneath your eyes, watch as every chapter opens you up to new secrets and shocking truths, watch as all of the pieces neatly fall into place once you reach the end.
One of the things I loved most about this book was the diversity of the characters - from a gay guy, to a smart, nerdy boy, to a beautiful, jealousy-demanding woman, to an old wise man, to the smart, strong male fighter and finally, the courageous female heroine. These characters will evolve and develop as the story progresses, allowing you to witness their varying transformations from weak to strong, happy to broken, hate to love and back again, good to bad and bad to good. What's better, you'll actually care about the characters because they seem so real and authentic. They will leave you with your mouth hanging open!
Despite all of this, I think the one thing I loved most about City of Bones was that it was genuinely funny. This book will have you laughing outright from the sheer humour.
Clary was kind of annoying when it came to the romance department though, all I really wanted her to do was open her eyes and see what was right in front of her, and maybe get nakey with Jace.
The only teeny weeny thing I can criticise this book on is that I wish certain terms had been explained properly as soon as they were mentioned, as this led to confusion.
Rating:
5/5

On a side note, in case you've been living under a rock or something, this book has been made into a movie (yay!) and will be released in late August of this year. For all the details, check out it's official IMDb page.

And as a gift to you, here is the movie trailer for you to watch again (because I'm sure you've seen it before, winky face).
*Price relevant to Australian stores
Posted by Book Nerd & Critic at 23:23