Title: Lament
Author: Maggie Stiefvater
Publisher: Scholastic Children's Books, an imprint of Scholastic Ltd
Year of Release: 2008
ISBN: 978 1407 12031 7
Source: Purchased
Number of Pages: 356
Sixteen-year-old Dee is a cloverhand- someone who can see faeries. When she finds herself irresistibly drawn to beautiful, mysterious Luke, Dee senses that he wants something more dangerous than a summer romance. But Dee doesn't realize that Luke is an assassin from the faerie world. And she is his next target.

This book has the most incredible plot. I loved it! It may seem like a childish book, as we have been taught that faeries are for children. They're small, sparkly winged creatures that dance around between flower petals and have a fascination for little kids. They're friendly. These faeries however, are not the faeries you and I are used to. In this sequence, Maggie Stiefvater puts a deadly twist on the original faerie lore. Though we believe them to be kind little things, the faeries in this book are dangerous beyond belief. They can be nice, but rub them the wrong way and you're a goner. They still have the characteristics associated with normal faeries- they like pretty things, music, dancing, flowers etc. but they're possessive. They see a pretty girl and they want to own her, to take her away and keep her forever. They also love games. With humans, that means toying with them. Making them so confused that they don't even know what day of the week it is and then stealing them away. A pretty, musically talented girl called Dee lives an ordinary life playing her harp and performing at gigs, but is put on the faerie's radar, essentially putting her life and the lives of those around her at risk. When she meets a mysterious boy called Luke and falls for him,  she has no idea that he has an ulterior motive- kill her. See, he's an assassin from the faerie world and she's got no way of knowing that she is his next target. Chilling, right? Throw in a heart-breaking love triangle, some strange telekinetic abilities and a malicious faerie queen hell-bent on having Dee destroyed, and ta-da! There's a book that won't leave you disappointed. This isn't the first time I've read this book either. I read it once before, when it was first released, way before I was writing this blog. I was younger then too, so I don't think I fully understood it. Now that I do, I can safely say that if you're looking for something different to read, give this book a go. The sequel, Ballad, has already been released and I will be reviewing that next for you.
Posted by Book Nerd & Critic at 16:53 No comments: 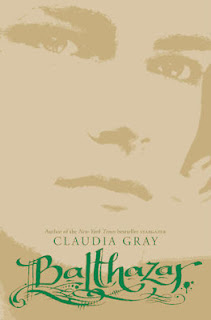 Title: Balthazar
Author: Claudia Gray
Publisher: HarperCollinsPublishers
Year of Release: 2012
ISBN: 978 0 7322 9208 9 (pbk.)
Source: Purchased
Number of Pages: 374
For hundreds of years, the vampire Balthazar has been alone without allies, without love.
When Balthazar agrees to help Skye Tierney, a human girl who once attended Evernight Academy, he has no idea how dangerous it will be. Skye's newfound psychic powers have caught the attention of Redgrave, the cruel, seductive master vampire responsible for murdering Balthazar and his family four centuries ago. Now Redgrave plans to use Skye's powers for his own evil purposes.
Balthazar will do whatever it takes to stop Redgrave and exact his long-awaited revenge against his killer. As Skye and Balthazar stand together to fight him, they grow closer- first unwillingly, then undeniably. Balthazar realises his lonely world could finally be changed by her...
In a story filled with formidable love and dark suspense, one of the most beloved characters in Claudia Gray's New York Times bestselling Evernight series will captivate readers with his battle to overcome his past and follow his heart.
Never in my wildest dreams would I have imagined Balty and Skye to get together. Skye was a very small character in the last series. In Afterlife, the wraith Bianca possesses a willing Skye in an attempt to escape a certain death trap. This provoked a connection between Skye and the world of the dead and since then, she has been experiencing vivid visions of previous deaths, no matter how long ago, when she comes across the place where that person died. Her sex/anatomy classroom at school? The janitor suffered a heart attack in that room and she experiences it each time she steps inside, forcing her to transfer out of that class. But these visions are only the beginning. They define Skye and now that the word is out, every vampire in the world will be out for her blood. Especially Redgrave, who will stop at nothing to collect and make Skye his forever.
I liked this book. It wasn't as good as when the story featured Bianca and Lucas as the main characters, but it was enjoyable just the same. Good old Balty was one of my absolute fave characters so it was incredible to have him as a main focus. As Skye and Balthazar fell more and more in love, I fell more and more in love with the book! Though it was kind of predictable what would happen, I enjoyed reading it all the same.
I highly recommend this book if you're a fan of the Evernight series and loved Balthazar as much as I did.
Guys, I'm sorry I haven't been posting as much lately, I've been really busy with school and with exams coming up soon, I won't have as much time to read as I usually do. So bear with me and I promise to give you a truck load of reviews when I finally get around to reading the millions of books stacked up in my closet.
Posted by Book Nerd & Critic at 19:10 No comments: