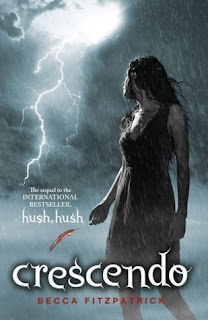 Title: Crescendo
Author: Becca Fitzpatrick
Publisher: Simon & Schuster
Year of Release: 2010
ISBN: 978-1-84738-720-7
Source: Purchased
Number of Pages: 427
Nora Grey's life is still far from perfect. Surviving an attempt on her life wasn't pleasant, but at least she got a guardian angel out of it. But Patch has been acting anything but angelic lately. He's more elusive than ever and, even worse, he's started spending time with Nora's arch-enemy, Marcie Miller. Nora would have hardly noticed Scott Parnell, an old family friend who's moved back to town, if Patch hadn't been acting so distant. Even with Scott's totally infuriating attitude Nora finds herself drawn to him- despite her lingering feelings that he's hiding something.
Haunted be images of her murdered father, and questioning whether her Nephilim bloodline has anything to do with his death, Nora puts herself in increasingly dangerous situations as she searches for answers. But some things are better left buried, because the truth could destroy everything- and everyone- she trusts. With just as much- maybe more- suspense and mystery than the last book, Crescendo was fast-paced and thrilling. Sexy and seductive. The first chapter suggests secrets and mystery and I found- just like last time- that I simply could not tear my eyes away from this book! There was a lot more humor in this one and I found myself laughing aloud in certain areas of the book, too. I keep a notepad and pen on my bedside table, which is also where I keep each book I am currently reading so that I can jot down things I like and dislike about a book while I read, which helps me write my review later. While reading Hush, Hush and Crescendo, the pages just keep filling up with my messy handwriting of all the things I loved about these books! I really admire Becca Fitzpatrick's style of writing, the characters she creates and the story lines she puts into action. Genius. Above all, I was incredibly impressed with the direction Becca took with the story. I didn't know so many secrets could come out in one book! It was like boom!, boom!, boom! and I was like "woah, slow down!". I was continually being shocked by all the things Nora was uncovering. Once again, very refreshing compared to other teen fiction books and definitely the best series out the the angel-themed bunch.
Definitely a good read, although you will need to read Hush, Hush first to understand it properly and pay close attention. It can get a bit confusing! Highly recommended.
Posted by Book Nerd & Critic at 18:49 No comments: 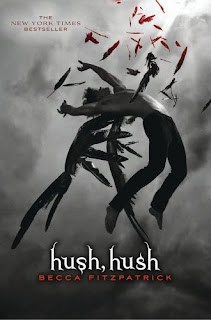 Title: Hush, Hush
Author: Becca Fitzpatrick
Publisher: Simon & Schuster
Year of Release: 2009
ISBN: 978-1-84738-694-6 (hbk.)
Source: Purchased
Number of Pages: 391
Falling for the fallen...
'I knew the names of all my classmates... except one. The transfer... He sat slouched one desk back, cool black eyes holding a steady gaze forward... His eyes sliced into me and the corners of his mouth tilted up. My heart fumbled a beat, and in that pause, a feeling of gloomy darkness seemed to slide like a shadow over me. It vanished in an instant, but I was still staring at him. His smile wasn't friendly. It was a smile that spelled trouble. With a promise.'
For Nora Grey, romance was not part of the plan. She's never been particularly attracted to the boys at her school, no matter how much her best friend, Vee, pushes them at her. Not until Patch came along. With his easy smile and eyes that seem to see inside her, Nora is drawn to him against her better judgement.
But after a series of terrifying encounters, Nora's not sure who to trust. Patch seems to be everywhere she is and knows more about her than her closest friends. She can't decide whether she should fall into his arms or run and hide. And when she tries to seek some answers, she finds herself near a truth that is way more unsettling than anything Patch makes her feel.
For Nora is right in the middle of a centuries-old battle between the immortal and those that have fallen- and sooner or later, she's going to have to pick a side... I loved this book. From the very first page, you get a compelling sense to keep reading. Becca Fitzpatrick is amazingly talented and a beautiful writer. This book was amazing. Upon being first introduced to Patch, even though he doesn't "technically" exist (pffft), you are instantly attracted to his character which is seductive, funny, compelling, mysterious and enchanting. There is something alluring about Patch. You can sense he has a dark side and it's really no use ignoring the urge to spend an entire day reading to find out what it is. Just as Nora is mesmerized by Patch, readers to are drawn to his mysterious, bad-boy bravado. If I could describe this book in one word, besides amazing, it would definitely be addictive. I couldn't put it down!
The ending was really something. I couldn't have asked for a better closure. Well done Becca! One of the things I liked most about Hush, Hush was that is was so oddly refreshing. There is nothing better than a book about a forbidden love, but paired with a mysterious, thrilling story-line, it makes for a killer book. Throw a century-old battle in there and you've got yourself a best seller. Money well spent. I loved every moment I spent with my nose stuck in this book. Aside from the actual story, I loved the cover art too. Truly beautiful. Better than an apple. (Sorry Twilight).
I highly recommend Hush, Hush if you're a fan of paranormal romances, thrillers or just looking for something a little different to vampires and werewolves. Enjoy! Links;
http://beccafitzpatrick.com/
Posted by Book Nerd & Critic at 21:55 No comments:

Review: The Eternal Ones by Kirsten Miller 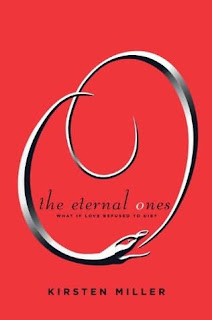 Title: The Eternal Ones
Author: Kristen Miller
Publisher: Razor Bill
Year of Release: 2010
ISBN: 9780141331997
Source: Purchased
Number of Pages: 411
Ever since Haven Moore can remember, she's experienced visions of a previous life as a girl named Constance, whose love for her soulmate Ethan ended in tragedy. And then the sight of the world's hottest movie star, Iain Morrow, brings Haven to her knees. She knows she has met him before. Is Iain her beloved Ethan?
Unable to deny her past any longer, seventeen year old Haven flees to New York to find him- and an epic love affair begins. But it is both deeply fated and terribly dangerous. Can Haven unlock the deadly secrets hidden in her past lives- and loves- before all is lost and Ethan disappears again... forever?
This entrancing mystery thriller was amazing. I loved every second I spent reading it. Incredibly thought-provoking and very well written, Kirsten Miller has produced an excellent book that was sure to give birth (for lack of a better expression) to many fans. The idea of reincarnation is a very interesting debate topic and I had a lot of fun getting a quick glimpse into the conspiracies behind it. The Eternal Ones contained everything on the Book Nerd & Critic checklist. Whimsical character? Check. Great descriptive language? Check. Humorous? Check. Thought-provoking? Double check. You can't help but admire Haven's character. She's just an innocent girl at the beginning of her life, thrown into a world she doesn't understand. Following her journey through The Eternal Ones has been a great pleasure and I cannot wait to read the next installment, All You Desire.
I highly recommend this book if you're looking for something a little different to read.

Links;
www.theeternalones.com - Official website for The Eternal Ones. I recommend having a read of the 'About the Author' section to get an insight of the woman behind the story.
Posted by Book Nerd & Critic at 17:15 No comments:

So, do you remember Bloodlines? That was an awesome book, wasn't it?
Fans of Richelle Mead's work and those who have read Bloodlines will undoubtedly know that that book was written in the point of view of Sydney Sage, a character that we got the opportunity to meet near the end of the Vampire Academy series. However, Richelle Mead originally planned to have each chapter of Bloodlines narrated by a different character, in the fourth person.
This proved to create too many complications and she instead settled to have the story told from Sydney's point of view.

This is an exert from the original plan of Bloodlines, the first chapter, told in the POV of the witty character of Adrian Ivashkov.
I've included a link below where you can go to read the eight page long chapter for yourself, if you haven't already.
It's surprisingly good and I really enjoyed reading it!

Please leave comments, I would love to hear opinions!