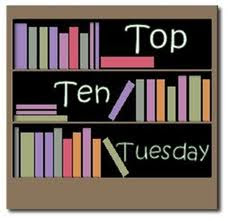 Top Ten Tuesday is a weekly feature hosted by The Broke and the Bookish. Each week, we'll make a list of our top ten something and this week, it's our Top Ten Favourite Romances.
1. Rose Hathaway & Adrian Ivashkov
As soon as Adrian meets Rose in Frostbite, he has his sights set on her. Though he can be quite cocky and suggestive, he has a certain charm that Rose can't help but feel attracted to. She avoids him through the series until Spirit Bound, where she eventually agrees to date him. Adrian acts like he is all carefree and easy, but everybody knows he loves Rose more than anything, which is proven when she breaks his heart to be with Dimitri.
2. Romeo & Juliet
This one is kind of obvious and is on most TTT lists today, I'm sure. Romeo and Juliet is one of the most well-known and iconic love stories ever to be written. Their love for each other is absolute and the two even end up dying for each other.
3. Bella Swan & Jacob Black
Though they're not the main love story of the series, Jacob really does love Bella and tries to win her over in ways that don't always turn out in his favour. For example, in Eclipse, Jacob forces himself on Bella in a kiss that she doesn't want and this doesn't earn him any points with her or Edward, for that matter.
4. Patch & Nora
From the Hush, Hush series, this is an incredible love story that spans over 4 books, and hopefully there will be movies soon. Patch is a fallen angel whose first intention is to sacrifice Nora so that he can become human and experience human feelings and sensations. Instead, he falls in love with her and makes a different call, giving up his only opportunity to become human.
5. Grace & Sam
Of the Shiver trilogy, Grace and Sam are an epic story of love and sacrifice. Sam is a werewolf that can only be human during the summer months and Grace is a human that was attacked by wolves when she was a little girl. Sam will give anything to be human and be with Grace all the time, even if it means risking his life.
6. Ron Weasley & Hermione Granger
This is a great one, I think. Ron and Hermione start out hating each other at the start of the series, but eventually begin to develop feelings for each other and act on them.
7. Lucinda Price & Daniel Grigori
In the Fallen series, Luce and Daniel have a love story that trumps all others. Their love spans over centuries, with Luce being reincarnated as a different person every lifetime. You'll have to read the books to understand it fully, but their love transcends all boundaries. Literally.
8. Katniss Everdeen & Peeta Mellark
Does this even require an explanation?
9. Lucas & Bianca
Of the Evernight series, Lucas is a vampire hunter and Bianca is a vampire. They fall in love, despite their differences and Lucas vows to love her forever despite everything he has grown up believing. This causes a lot of confusion for him, but his love for Bianca is inevitable and he would do anything for her, even when they fight, even with the presence of a love triangle, he loves her through it all, and vice versa.
10. John & Sarah
The main love story in I Am Number Four, John is from another planet on the run from a different alien species that plans to hunt and destroy him and all the others left of his kind. He has to move from town to town, never staying in one place too long and he cannot have connections with humans. When he falls for Sarah in Paradise, Ohio, he risks everything to be with her. What's even more romantic is that with his species, they only fall for one person in their entire life, and John knows Sarah is that girl.
Posted by Book Nerd & Critic at 20:01