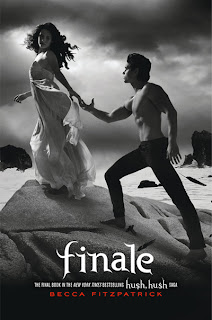 Author: Becca Fitzpatrick
Publisher: Simon & Schuster
Year of Release: 2012
ISBN: 978-0-85707-292-4 (TPB)
Source: Purchased
Number of Pages: 453
Nora is more certain than ever that she's in love with her fallen angel, Patch, despite her Nephilim heritage making them destined to be enemies. For her, there's no turning her back on him. But now Nora and Patch must gather their strength to face on last trial. Old enemies and new are ranged against them, standing between them and the peace they so desperately crave. The battle lines are drawn- but which sides are they on?
As the title suggests, Finale is the last book in the Hush, Hush sequence and it was just phenomenal. This book did an excellent job at fulfilling my expectations. As the last book in a popular series, readers will obviously have high expectations of the book and it's a real let down when the book isn't as great as you hoped it would be. Though there were a few things I need to criticise the book on (I'll get to that later), I did really enjoy reading this.
**SPOILER**
At the end of Silence,  Nora swears a Changeover Vow to Hank, to transform herself into a Nephil and lead his army to freedom from fallen angels. In order to fulfil her vow, she must lead Hank's Nephilim army to war and win, otherwise she and her mother will die (terms of the vow). To make things even more complicated, Patch, the love of her life, is a fallen angel, and if she sides with the Nephilim, she risks losing him forever.

The book had a great plot, but there are a few things I didn't like about it that I would like to express here. First off, I found the book to be a little too repetitive at times. (**SPOLIER**) As the leader of the Nephilim army, Nora agrees to train with a much stronger Nephil named Dante. He works her hard, getting her up in the early hours of the morning to train, so most chapters began with him waking her up and then going straight to training. It was always the same thing, and this made the parts of the book quite boring.
Another thing I need to note is that Fitzpatrick's writing needs a little work when it comes to relaying past events in previous books. I felt like I was reading the last book all over again!
Lastly, I didn't like the way she portrayed Patch and Nora's relationship. They're more in love with each other than ever, and I think that's great, but they're so possessive of each other, it's borderline obsessive!
Other than that, I loved it!

The storyline was amazing and I loved the way it ended, although a few things happened that caused tears to brim in my eyes, so if you are yet to read this one, keep the tissues close by! This book definitely had more suspense and action than the last three, and that kept the pages turning.
If you haven't read this series yet, I really recommend getting into it. Some people aren't particularly fond of the series, I've read a few harsh reviews, but I think these books are great! I've finally completed the series and if you've read them, let me know what you thought in the comment section below.
There are a few angel themed books out there now in YA Fiction, and in my experience, this is the best series yet. It's not perfect, but it comes pretty darn close.